I have a jar of peppers on my table that makes my eyes water even though I haven’t opened it yet. I’m going to tell you about raised vegetable gardening and a wonderful project on Maple Street. You’ll find out about the peppers at the end of the article.

We are coming up on the perfect time of the year to get your vegetable garden ready for next spring.  Over the years of building gardens for myself and others, I have found that the very best way to grow things is in raised beds.  My feelings were reinforced this past spring when we helped the Three Rivers Garden Club build a vegetable garden for one of the Boys and Girls clubs in Rome, Georgia. You may use these tips for your own garden.

In my opinion, raised beds are the only way to go for a vegetable garden.  There is no need for a tiller, maintenance is relatively easy, and the results are amazing.  Raised beds give you all of this and no mud

I was first asked by the garden club to donate a design for the garden.  After a bit of thought, I drew out a design that consisted of a series of raised beds with gravel walkways that would offer not only a growing system but also a walk-through “meditation garden.”  After designing the garden I was, of course, asked to build it.  I was amazed at the results.

We decided to use treated landscape timbers for the frames.  These timbers are easy to work with, and if you use the right techniques it will look really, really good. 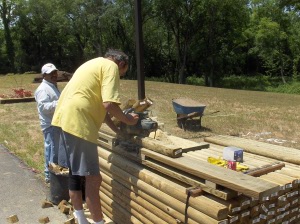 The first step was to cut 22-1/2 degree angles with an electric miter saw and lay out a pattern for the beds.  The pattern was laid out to check for accuracy.  Notice the corners of the frame-a 2 ft mitered joint gives the impression of roundness.

After getting the prototype cut and adjusted to exactly what we were looking for, we prefabricated the rest of the frames, cutting all of the parts to exact dimensions so that the beds would all be the same.  A few beds are smaller to fit the design, but the corners are the same.

The corners are put together in place with the use of an electric drill and “Deck Mate” screws.  This is the easiest and most effective way of putting them together.  We checked to make sure that the frames were level and square.

I am fortunate to have found Mike Hutchins from Menlo, Georgia, who makes compost from manure, cottonseed waste, and wood chips. In the picture below the beds have been constructed, filled with compost, and the gravel walkways are under construction.  Note that the pea gravel is being installed to the top of the bottom timber.

On June 15, the garden was ready to plant. The compost had been raked out and topped with a mulch of cypress chips.

Planting the garden was fun.  We were on a fine time line with this one as it wasn’t finished until June 14, and we had decided that the latest date for planting the summer garden was June 15. Right on schedule, on June 15, Bud Sims came to show the boys and girls how to plant.  They planted tomatoes, peppers, squash, cucumbers, and other summer garden plants.  A drip irrigation system was installed to allow watering from the soil level and to provide good water conservation.

The plants grew rapidly, and here’s what we had a month later on July 15.

When we started the garden for the Boys and Girls club, I had my doubts as to the effectiveness of the project, but my doubts were proven to be groundless.  In August, I talked with Carrie Edge, the director of the B&G club.  Carrie told me that the kids would go out in groups each morning and each afternoon to harvest.  She showed me boxes and baskets of tomatoes, peppers, and other produce from the garden.

Carrie told me that the garden provided a snack for close to 200 kids every day and that many days the kids had a handful of goodies to take home.  Parents and staff members started noticing the snacks and would bring freshly baked bread or a roast of beef to supplement the meals.  The entire community became involved. The results of my talk with Mrs. Edge made me choke up a bit.  It reminded me of the fable, “Stone Soup” which deals with sharing and has always been one of my favorites.

For the winter garden, the children cleaned out the frost damaged vegetable plants and planted onion, collard and cabbage plants.  Then they planted seed for radishes, turnips, and other greens.

All of that brings me to the jar of peppers. The garden club ladies were involved with the project and helped the children preserve part of their produce.  I was presented with a mason jar of pickled peppers that was beautiful, moving, and touching.  Every time I look at it, I get tears in my eyes.

You may not want your personal garden to be quite as large as the one we built, but the principle is a good one.  If you don’t have someone to furnish you with compost as I did, you may make your own by using screened topsoil, peat moss, ground bark, home compost, and such.  If you use a lot of organic material, be sure to add lime. I will write more about composting in an upcoming article.  I love compost.

You can read more from John the plant man in the hilarious and sensitive book REQUIEM FOR A REDNECK. Now available on Kindle.

p.s.  When we were planting for summer, I asked one of the kids if she had ever planted anything before. She replied, “No, we live in an apartment and there ain’t no dirt around nowhere.”

3 thoughts on “Raised beds for a vegetable garden”