Because Grandpas can’t hear an elf man but a little girl can.

One nice summer day, Margot’s momma and daddy had to go somewhere important. Grandma needed to go to a meeting. Margot’s momma said, “Now, Margot, you and Grandpa can play in the yard together. Please try to keep Grandpa out of trouble.” Grandpa had a funny look on his face.

Grandpa and Margot held hands and walked around, looking at all sorts of nice flowers and a mirror on the fence that looked like a window but it wasn’t. 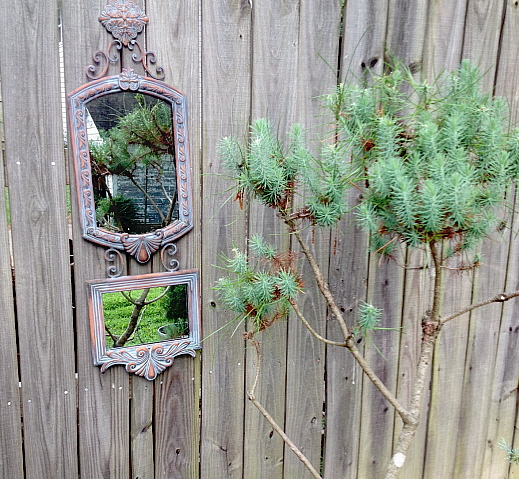 The two of them planted some flowers in pots. Grandpa asked Margot to water some flowers. He had a watering can that was just her size. Time went by.

Margot wanted some rocks to play with, so she and Grandpa gathered up some pretty ones from here and there. Margot said, “I want to make a mountain and a road. She put the rocks near the corner of the deck. 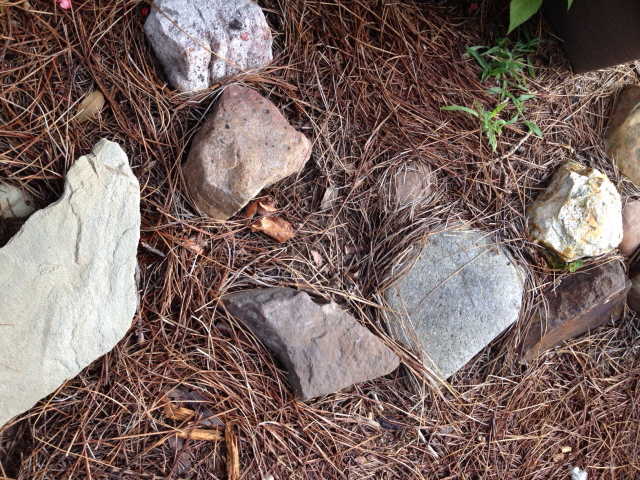 Grandpa said, “I think I would like to go inside and have a cup of coffee. Would you like something, Margot?”

Grandpa said, “That’s nice, I’m sure he will enjoy it.”

Grandpa went in the house and got his coffee. He thought, “I was told to not leave her alone, but there is a big fence all around the yard and she’s busy playing with rocks. What could go wrong?” He sat down in his chair and picked up his morning paper.

There was a big, loud,
BANG
Grandpa said, “AWWWW, Man,” and walked out the door.

Outside, Margot was squatted down, looking under the deck. She was talking very quietly. Grandpa glanced around and that was when he saw that his brand new flower pot had been broken. A rock sat next to the pieces

Grandpa quietly said, “What has happened here? Now who could have done this?”

Margot stood up, looked at grandpa and said, “The elf man did it.”

Grandpa asked, “Where is the elf man?”

“He’s under the deck. I was talking to him. He said he’s sorry he broke your pot. He was trying to make a garden just for him and the rock was too heavy. He’s really sorry and he doesn’t want to get in trouble.”

Grandpa smiled gently and said, “It’s all right. He won’t get in trouble. Elf men are special. We will have to be nice to him.”

Margot smiled and squatted down to look under the deck. “He said it is all right, mister elf man….what? …OK, I’ll tell him.”

She stood up and looked at Grandpa. “He said that he is sad because he doesn’t have a garden to play in.”

He looked down at the space under the deck

He looked at the broken flower pot.

He looked back at Margot, smiled gently, and said, “Then why don’t we make a garden for the elf man?”

Margot jumped up and down and clapped her hands. “Yayy,” she said, “the elf man will be happy.”

Margot watched as Grandpa got a bag of potting soil.

“But Grandpa…” she said, “The flower pot is broken.”

“It’s all right,” said Grandpa, “The elf man left us this rock to fix it with.”

Grandpa put the broken part of the pot inside the pot and propped it up with the rock. It looked like this: 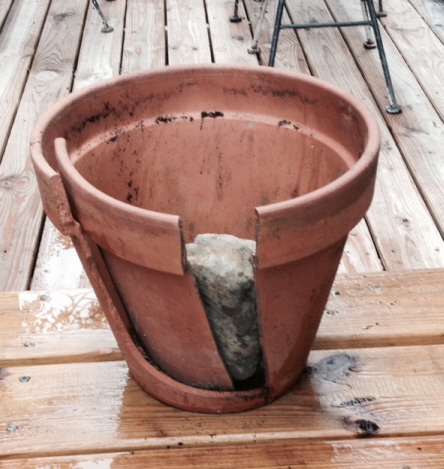 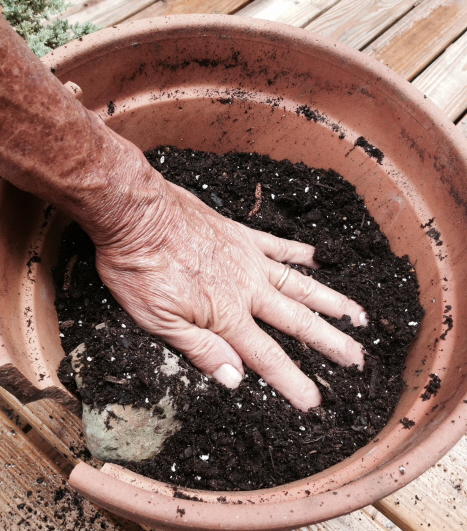 “There,” said Grandpa as he finished putting the soil into the broken pot. “Now it will all hold together.”

“I think the elf man will like it,” said Margot.

“But,” said Margot, “but how is the elf man going to get up into his garden?”

Grandpa put his finger up to the side of his head and thought about it. “How about if we put something there for him to climb up on?”

“Ok,” said Grandpa. Here’s a vine for him to climb up on. It’s called a ‘sedum.’” Grandpa planted it in the pot over the rock.

“Yes,” said Margot, “He can climb up that vine. He will like that.”

Grandpa said, “I guess we will need a tree. I have a nice one, it is called a ‘jade plant.’” The jade plant looked like this:

Margot stood on a stool and helped Grandpa plant the tree. He showed her how to pack the soil around the roots so that it wouldn’t fall over. “oooooh,” said Margot, “now the elf man can climb up into the tree and see all around.”

Grandpa looked at the garden. “Maybe we need to find him a dead tree trunk to sit on and a rock. Would the elf man like that?”

“Oh, yes, elf men love having dead trees to rest on and rocks to climb on.”

Grandpa and Margot found a couple of other plants to put into the garden. Grandpa said, “the one on the right is called a ‘jewel of the nile,’ the other one is something I picked up at the store. I don’t know it’s name, do you?

“There,” said Grandpa. “This is turning into a nice garden for the elf man.”

Margot looked concerned. She glanced up at Grandpa and said, “but, Grandpa, what if he wants to go fishing?”

Grandpa put his hand up to his forehead. “Oh, No,” he said, “How could I have forgotten about how much an elf man loves to fish. What will we do? Wait a minute. I’ll be right back.” Grandpa went into the house and came out with something in his hand. “Look,” he said, “Grandma was going to throw this away. It’s our lucky day.” He had a mirror. “What do you think, Margot? It’s not a real lake, but I think it will do.”

Margot smiled and said, “It’s all right, silly Grandpa. Don’t you know that everything is real to an elf man? If he wants it to be a lake, it will be a lake.”

Grandpa put the mirror into the garden.

Margot studied it from the front. She went around to the other side of the garden and looked. She pointed and said, “I think the elf man would like the lake better if it was back here.” So they moved it

“That’s much better,” said Margot. “Now he can sit under the tree and go fishing. But…”

“I know,” said Grandpa, “It needs grass around it and a rock for him to sit on.”

“Grandpa, sometimes you can be smart.” Said Margot.

They walked around the yard and found some moss that looked just like grass. They put it around the lake.

They found just the right rock for the elf man to sit on and they put it in just the right place. “There,” said Margot. “He is really going to like that.”

“But, Grandpa…He doesn’t have a path to get to the sitting rock and the lake.”

“Oooookaaay,” said Grandpa, “Let’s make him a pathway. We can line it with shiny rocks.”

“Look,” said Grandpa, “I have some aquarium gravel to use for the pathway so the elf man won’t get his feet dirty.” They put the tiny rocks into the pathway and smoothed it out. Margot reached out and walked up the path with her fingers. She smiled.

“It’s easy to walk on, Grandpa. I tried it out. The elf man will like it.”

Margot and Grandpa worked on the garden for a while longer. They got everything just as they thought the elf man would like it. They stepped back and looked at their creation. Grandpa put it near a flower bed. “The elf man will like this,” said Margot.

Margot knelt and peered under the deck. She whispered something, then, after a moment, Grandpa heard her whisper again, “Ok, I’ll tell him.”

She stood up and said, “Grandpa, the elf man wants us to walk around the yard so we won’t see him go to the elf man garden.”

So, Margot and Grandpa walked around the yard for a few minutes. Then they went back to see if the elf man liked his garden. Margot bent over the garden and whispered something. She waited, listening, and then whispered again, “Ok, I’ll tell him.”

“Grandpa, the elf man wants you to move the garden over there.” She pointed. “Oooookaaay,” said Grandpa. He moved the garden.

Later, Margot said, “Grandpa, I know an elf man poem. Would you like to hear it?”

“Yes, Margot, I would,” said Grandpa.

Margot put her hands on her hips, looked up at Grandpa, and said,:

I met a little elf man once
Down where the lilies grow
I asked him why he was so small
And why he did not grow.

He cocked his head
And with his eye
He looked me through and through.
I’m quite as big for me he said
As you are big for you.”